20 Facts You Might Not Know About The Washington Monument

Hundreds of thousands of tourists visit the Washington Monument every year. The 550-foot obelisk honoring the first U.S. President is an imposing exclamation point in our nation’s capital, but how much do you really know about it?

Making it even more mysterious is the fact that over the last decade the landmark has rarely been open to the public. Thanks to 2011’s earthquake and the current issues with the elevator an entire generation of tourist families have missed opportunities to gaze patriotically from 500-feet above the District.

Doing our best Robert Langdon impression we dug up some interesting facts about the Washington Monument.

1. The Continental Congress passed a resolution to build a monument to honor the first U.S. President George Washington in 1783.

2. Life gets in the way. Construction finally started in 18448 starting the Washington Monument’s nearly 40-year journey to completion. Construction of the 554-foot obelisk started in 1848 but it didn’t open to the public until 1888. What happened? Plenty, including issues with funding, internal struggles in the Washington National Monument Society, and the Civil War.

3. The monument was the world’s tallest man-made structure for a moment. Once the capstone was placed on December 6, 1884, it was taller than the previous title holder, Germany’s Cologne Cathedral.  The French stole the title in 1889 when they finished the Eiffel Tower.

4. It’s still the tallest obelisk in the world. 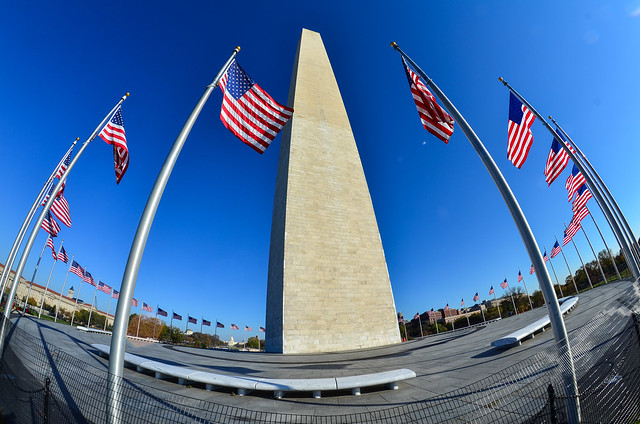 5. The pyramid on top of the monument is made of aluminum. Each face of the pyramid has inscriptions, but they were destroyed when lighting rods were removed from the apex in 2013. Blue shows legible inscriptions and red shows ruined inscriptions.

6. There’s an adorable mini-monument hidden under a manhole near the monument. Standing 12-feet high, the mini-monument is actually a Geodetic Control Point used to help synchronize maps. Occasionally Park Rangers will lift the manhole lid for curious monument super fans.

[/media-credit]7. The stairwell walls have 193 commemorative stones from all 50 states and various foreign countries. Alabama contributed the first stone in 1849. Alaska was the final state to place a stone. The second to last state to join the union chose an impressive stone carved from jade.

8. Steampunks pay attention! The original elevator was steam-powered and would rocket visitors all 500 feet in a breathtaking 20 minutes (the current elevator takes 72 seconds).

10. If Congress somehow approved the construction of a completely identical monument in 2018 it would cost around $350,000,000 (that’s the equivalent of 200 Washington Monuments to one U.S./Mexico border wall).

11. Carl Sandburg and Walt Whitman have commemorated the structure in poems.

12. One proposal would have placed Washington’s body in the monument. Thankfully, his family wanted to keep his corpse in Mount Vernon near his whiskey.

13. The monument was supposed to be on an axis with the Capitol and White House. Unfortunately, the heavy structure wouldn’t have been stable in the original location. It was moved 300 feet off the original axis screwing up aerial drone photos a century later. 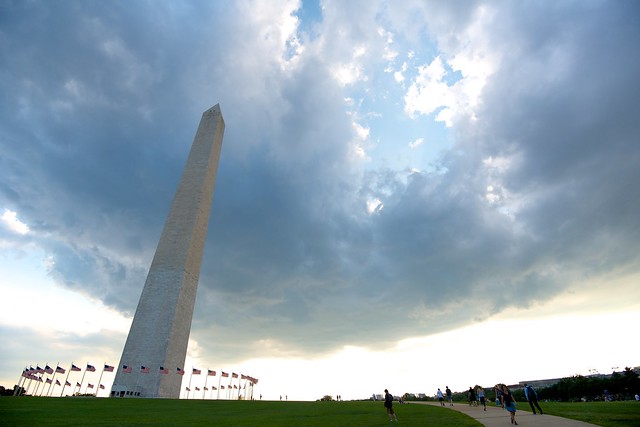 14. After we’re extinct and the aliens knock over our obelisk they’ll find a bunch of stuff underneath. Yes, Dan Brown wasn’t fibbing, there really is a bible! Additionally, you’ll find the typical things one would expect in a Patriotic time capsule like U.S. coins, a copy of the Constitution, coat of arms of the Washington family, and a message from the U.S. President.

15. They also put items underneath that seem weird 100 plus years later (this could be an entire blog post). Future people will find the poems of the mostly forgotten Joseph Rodman Drake who probably earned his place thanks to his poem “The American Flag.” In the future they’ll also learn that we shunned alcohol thanks to the inclusion of a copy of the constitution of the first organized Temperance Society in America.

16. The temperance folks reinforce their message with a stone inside the monument that reads: “We will not make, buy, sell or use as a beverage any spirituous or malt liquors, wine, cider, of any other alcoholic liquor, and will discountenance their manufacture, traffic and use, and this pledge we will maintain unto the end of life.” Prost!

17. In 2017, Burners came close to temporarily erecting a 45-foot-tall naked woman next to the Washington Monument. Unfortunately (fortunately?), the permit to erect the woman was denied at the last minute.

18. The Washington Monument might strike the more morbid among us as being a significantly symbolic place to commit suicide. However, thanks to forward-thinking prevention efforts only five people have committed suicide by jumping out windows or, in one case, jumping down the elevator shaft.

19. On August 23, 2011, a 5.8 magnitude earthquake struck 84 miles southwest of DC. The quake cracked the Washington Monument. The obelisk was closed for 994 days for repairs.

20. Although it reopened for a couple years it closed again in August of 2016 due to problems with the elevator. David Rubenstein has pledged $2-3 million to modernize the elevator system. We could soon start rising to the top of our tallest monument by early 2019. 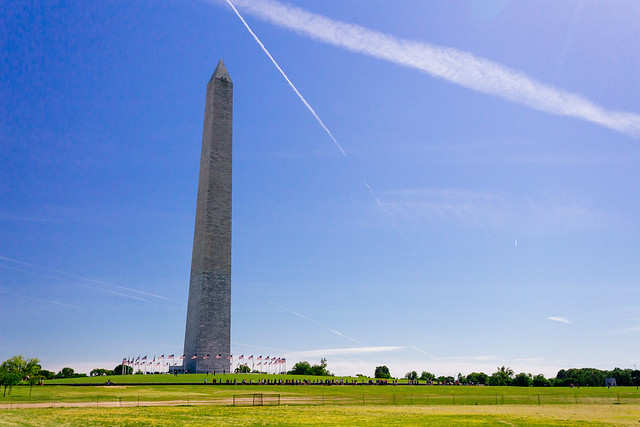