Chicago doesn’t receive enough credit for the sheer number of music festivals it hosts every year. We might not have the climate of Austin but we sure do make up for it between June and October. Over the course of 15 weeks, a grand total of 24 days are dedicated to some sort of large-scale outdoor music event – and that doesn’t include the city-run World Music Festival or random summer block parties.

And it doesn’t need to end at city limits. If you’re feeling ambitious and passionate about music there are more than a dozen upper midwest summer music festivals within a six-hour drive of the city.

Below you’ll find our comprehensive guide to not only Chicago music festivals, but music fest throughout the Upper Midwest. From Chicago to Wisconsin to Detroit to Iowa, we’ve got it covered. We’ve broken the festivals down by distance and within each distance cluster they’re ordered by date. Did we miss an important festival or update? Let us know in the comments.

Note: As new info starts coming in we’re updating this information from 2017 to reflect 2018. Currently, festival dates have been updated. In most cases, lineup dates are still pending. Last updated March 3, 2018.

Spring Awakening Music Festival kicks off the Chicago music festivals season and is the biggest electronic music festival in the Midwest. 2018’s roster is packed with big name DJs like deadmau5, Flux Pavilion, NGHTMRE, Nicky Romero, and more. One of the not-to-be-missed highlights of this year is the reunion of Sasha and John Digweed.

Chicago’s only music festival where you can cool off in the waters of Lake Michigan. Mamby on the Beach has roots in House Music but has grown to have a greater focus on indie dance bands. Early bird tickets for 2018 are on sale now. In 2017, MGMT took the headlining slot on Saturday with Walk the Moon leading the pack on Sunday. Other performers included Flying Lotus, Miike Snow, Strfkr, and Cut Copy. MixMag’s tent featured a Sunday night celebration of the 25th Anniversary of  Relief Records with a set from the legendary Green Velvet. Prepare to flash.

The Ruido Fest is becoming one of the biggest Latinx festivals in the country. 2018’s lineup is still under wraps, but headliners for 2017 included Julieta Venegas, Molotov, and Intocable. The festival is a well-balanced mixture musical genres featuring garage pop, dance rhythms, techno-punk, and metal.

As of this writing, P4K is still teasing the 2018 lineup but we do know some of the acts. Friday standouts include Melkbelly, Courtney Barnett, and Tame Impala; Saturday has The War On Drugs, Zola Jesus, and Girlpool; Sunday is giving us Japandroids, Smino, and Kelly Lee Owens.

If you like your music a little bit heavier skip Pitchfork and head to Bridegview for Chicago Open Air’s metal fest. The festival features the usual acts you’d expect headlining a metal fest: Korn, Ozzy, and Kiss. However, the real story is in the deep bench. Open Air currently features a couple of acts that to date haven’t announced formal 2017 tours including Body Count and Meshuggah. Other standouts include Dillinger Escape Plan, Pig Destroyer, and Amon Amarth. 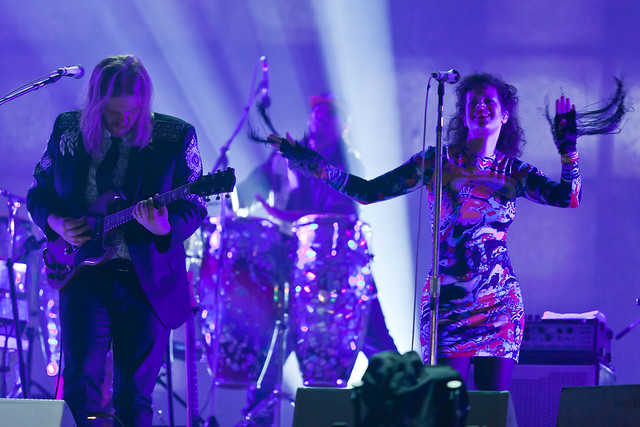 If Lollapalooza happened to be a human, this would be the last year it would be covered under Perry Farrell’s health insurance. In 2016, the festival celebrated 25 years and expanded to four days from three as a way to celebrate. It worked out so well they stuck with the model for 2017.

North Coast is where you go when you want to capture the last good vibes of summer. This is the seventh year for the music festival which features a mixture of electro, jam, folk, and hip-hop. Headliners this year include Deadmau5 with Eric Prydz, Damian Marley, and Ween. You’ll also catch acts like Gucci Mane, Derrick Carter, Sunsquabi, Big Boi, Primus, and The Cool Kids.

Riot Fest has risen to become one of, if not thee, top punk festivals in the country. Of course, we use the term “punk” loosely, because as the festival has grown so has the genres allowed to grace the festival’s stage. This year will see headliners jawbreaker, Nine Inch Nails, and Queens of Stone Age. Also taking the stage will be a diverse selection of bands including Wu-Tang Clan, Ministry, New Order, Gogol Bordello, M.I.A., Hot Water Music, Peaches, and Bad Brains. Seriously, there are few other places you can find a mix of artists like that. While you’re waiting for Riot Fest weekend consider stopping at the spin-off pop-up restaurant The Riot Feast. 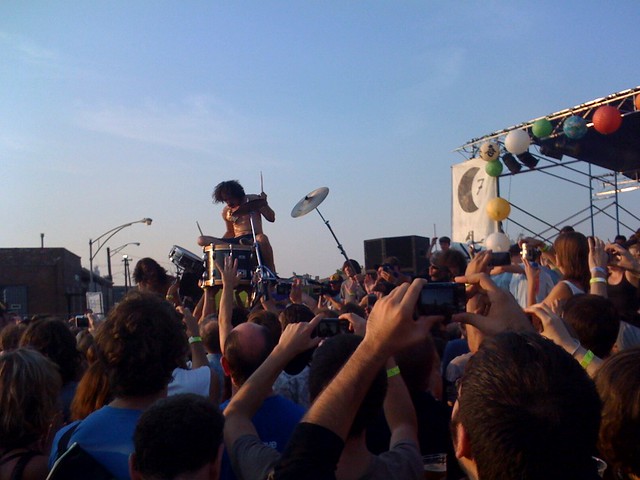 Hideout is giving us a block party!!! And it’s a legit two-day block party!!! The lineup includes indie rock luminaries like Eleventh Dream Day, Man…or Astroman?, and Danielson. Also taking the stage will be Condo Fucks, Meat Wave, Shannon Wright, and more. Tickets are on sale now. Saturday will be a 60th Anniversary celebration of the Sputnik launch and Sunday is the 20th Anniversary of Steve Albini’s legendary recording studio Electrical Audio.

Common’s AAHH! Fest will return to Union Park this year. Tickets are on sale now with lineup announcement expected soon? We think? Anyone?

Has Summerfest really been around for more than 50 years? Headliners announced as of this write up include Arcade Fire, Imagine Dragons, J. Cole, Journey, and many more.

A festival so chill it takes place in a town called Chillicothe. This year features three days of moe. and Umphrey’s McGee, and two sets of The Trey Anastasio Band. Les Claypool is also pulling double duty with a set as part of Primus and a second performance in The Claypool Lennon Delirium. Other acts include Zed’s Dead, Gov’t Mule, Run The Jewels, Yonder Mountain, and more than 60 additional acts.

Pygmalion is a great excuse for a road trip to visit beautiful Champaign-Urbana, Ill. The festival is a perfect mixture of known acts, like Animal Collective and Thundercat, as well as rising indie stars like Sunjacket, Gogo Penguin, and Charly Bliss. In addition to music, the festival features a maker’s fair called “MadeFest” and a hackathon called PygHack.

There are plenty of EDM festivals, including Michigan’s Electric Forest, but Movement does it straight up old school style. Headliners for 2017 include Richie Hawtin’s visual-experience CLOSE, Deadmau5 performing as his alter-ego Testpilot, and Carl Cox.More than 100 DJs will perform over the three day festival.

Mo Pop Festival manages to infuse a music festival with the spirit of an old-fashioned boardwalk. There’s plenty of talent, including Alt-J, Run the Jewels, Solange, and Phantogram, but Mo Pop stands out for the activities. They’ll have a crafting area, a dart gun battlefield, yoga in the sand, an arcade, a Biergarten, and artist autograph signings. It’s also one of the most affordable festivals on this list making the drive worth it. Currently, you can get a 4-pack of 2-day tickets for $299 – roughly $75 per person.   —

Huh, Bush is still touring. Who knew? Northern Invasion is a nostalgic trip back to the alt-rock of mid-90s featuring acts like Godsmack, Soundgarden, Kid Rock, and Offspring. But it isn’t all 90s all the time. The lineup also includes heavy rock buzz bands like Gojira, Amon Amarth, and Pierce the Veil.

The brainchild of Justin Vernon, Eaux Claires is the music festival concept stripped down and made unassuming. The presentation of the festival is about creating once-in-a-lifetime experiences where the barrier between artist and fest attendee is diminished. This objective is defined in the way the festival lineup is presented. All artists are listed in equal size and alphabetical. The legendary Paul Simon will perform but his listing carries the same gravity as the lesser known Collections of Colonies of Bees. It’s a truly unique experience that justifies the 300 mile drive.

Electric Forest has made major adjustments for 2017 in an attempt to create a more intimate and immersive experience. They’ve broken the festival into two weekends, each of which will have lower capacities than previous years. A handful of bands, like String Cheese Incident and Bassnectar, will perform both weekends, but many, like My Morning Jacket and Thievery Corporation, will only make one weekend appearance.

80/35 celebrates eight years in 2017. Much like Champaign-Urbana’s Pygmalion it’s amazing music in a unsuspecting city. They’ll announce the lineup on April 4 but in the meantime, they’ve released the below video with hints to who’ll be in attendance.

If 80/35 is your first excuse to take a weekend vacation in Iowa, Hinterland is your second. This year the music festival, which usually sees around 14,000 attendees, features Alt-J, Ryan Adams, Head and the Heart, Foxygen and more.

If music festivals are the fifth chamber of your heart there’s nothing crazy about making the 530 mile drive from Chicago to Bonnaroo. The festival gets bigger every year in the number of artists but also its demographic net. This year, perhaps seeing the continued rise and popularity of EDM events like Electric Daisy Carnival, they’ve expanded the dance music opportunities with artists like Marshmello and Yellow Claw. There’s definitely a bigger swing toward pop appeal with closing night performers like The Weeknd and Lorde. Other headliners are U2 and Red Hot Chili Peppers. Some highlights including Michael Kiwaunka (who, let’s admit, had one of the best and most overlooked albums of 2016), Car Seat Headrest, Flume, Portugal, The Man, and Rainbow Kitten Surprise.